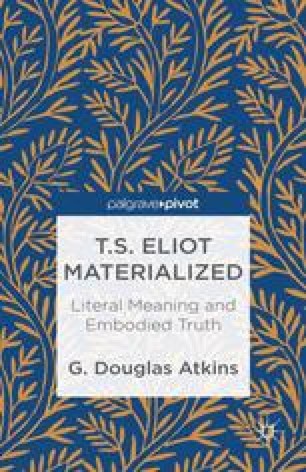 The Gift Half Understood: Incarnation as “Impossible Union,” Way, and Intersection

“The hint half guessed, the gift half understood” writes Eliot in Four Quartets, “is Incarnation.” By omitting the expected “the” before “Incarnation,” he refers to the pattern of which “the Incarnation” is the paradigmatic instance. The particular pattern that Incarnation names—as “impossible union” of opposites and the way of proceeding in, through, and by means of one “term” in its difference from the other—appears in hints as early as The Sacred Wood (1920). It finds its fullest expression in Ash-Wednesday (1930) and Four Quartets (1935–1943).

Literal Meaning Diffi Culty Paradigmatic Instance Divine Reality North American Literature
These keywords were added by machine and not by the authors. This process is experimental and the keywords may be updated as the learning algorithm improves.
This is a preview of subscription content, log in to check access.