Lucretius as Theorist of Political Life 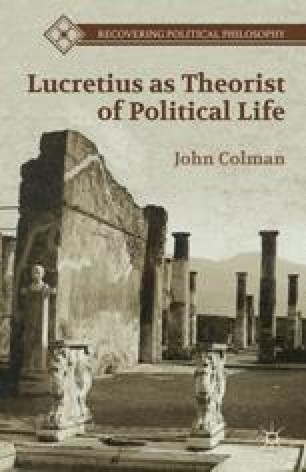 Lucretius as Theorist of Political Life pp 31-60 | Cite as

Lucretius wishes to reveal to Memmius the obscure discoveries of the Greeks but acknowledges that there may be some resistance on his part given the novelty of the teachings (I, 136–139, and II, 1023–1029 and 1040). Lucretius later attributes part of the difficulty with the introduction of novel teachings to a general wariness of looking upon the nature of things, and the heavens in particular (II, 1030–1039). One may infer from this resistance to novelty that a certain comfort is gained through acceptance of the stories of the poets and priests and that which philosophy reveals may be discomforting. Lucretius has, therefore, created some doubt about the status of religious myths and introduces the possibility that philosophy may reveal a truth more terrible than that of religion.

Secondary Quality Infinite Space Book Versus Bitter Truth Divine Creation
These keywords were added by machine and not by the authors. This process is experimental and the keywords may be updated as the learning algorithm improves.
This is a preview of subscription content, log in to check access.

Cite this chapter as:
Colman J. (2012) The Discovery of Nature and the Problem of the Infinite and Eternal. In: Lucretius as Theorist of Political Life. Recovering Political Philosophy. Palgrave Macmillan, New York. https://doi.org/10.1057/9781137292322_3