Foucault, the Family and Politics 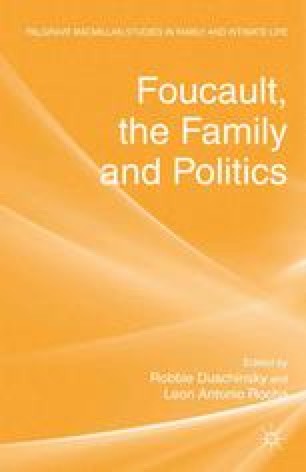 Foucault, the Family and Politics pp 1-15 | Cite as

The index of Dits et écrits, which contains all of Michel Foucault’s writings and interviews besides his monographs, does not have an entry for ‘family’. In part, this is because almost none of the voluminous number of books and articles produced by Foucault directly offer sustained discussion of the family Le Désordre des familles (with Ariette Farge, 1982), for instance, brings together letters between family members and the state regarding the incarceration of abnormal or delinquent individuals in eighteenth-century France, but contains no in-depth theorisation on families. There is some discussion of ‘the marital role’ in some chapters of The History of Sexuality, Volume 2 and Volume 3 (first published in French in 1984), but Foucault’s account sticks closely to the primary texts. Although contributing an incisive account of ethical subjectivity, these chapters by Foucault have not generally been seen as a theoretical contribution on the topic of the family. The family can seem like a spectre in the works that Foucault published in his lifetime: an amorphous, somewhat shapeless thing that he consistently mentions, flirtatiously alludes to and fleetingly gestures towards. Yet the family is a crucial theme in the Collge de France lecture series given between 1973 and 1978. In these lectures, Foucault explores the transformation of familial dynamics—most notably at the intersection between kinship, sexuality and the state—that occurred with the rise of the bourgeoisie in the nineteenth century.

Proper Form Disciplinary System Marital Role Sexual Instinct Intimate Life
These keywords were added by machine and not by the authors. This process is experimental and the keywords may be updated as the learning algorithm improves.
This is a preview of subscription content, log in to check access.