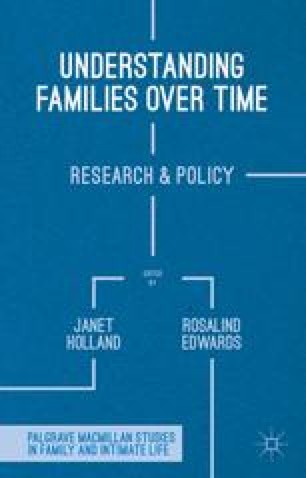 Grandparenting Across the Life Course

Mass grandparenting is a twentieth-century phenomenon. The likelihood of being a grandparent or great-grandparent has become more the norm as greater numbers of people have survived into later life (Herlofsen and Hagestad 2012: 30). For the oldest generation and their children, grandchildren and great-grandchildren, this has brought new experiences and relationships (Antonucci et al. 2011). Recent research and policy papers have tended to focus on what is referred to as ‘active grandparenting’ or ‘active ageing’ (see for example Harris-Johnson 2010, Van Bavel and De Winter 2011, Sahlen et al. 2012, Walker and Maltby 2012), contributing to campaigns that encourage participative and healthy lifestyles in later life with the aim of reducing health and social care costs. At the same time, an increasing number of grandparents are contributing care and support to their families during times of austerity (Arber and Timonen 2012: 253–256, Grace 2012). Grandparents’ support to family members conflicts with policies that aim to reduce the cost of pensions by delaying the age of retirement (Gray 2005). Moreover such policies tend to elide an ambivalence which more accurately describes relationships in late life, particularly where an older generation is seeking or expected to pursue independently fulfilling lifestyles (Luescher and Pillimer 1998, May et al. 2012).

Social Care Late Life Change Family Relationship Intergenerational Relation Formal Childcare
These keywords were added by machine and not by the authors. This process is experimental and the keywords may be updated as the learning algorithm improves.

Oh I was delighted, as a matter of fact I was getting ready to adopt grandchildren. I says What is the matter with my sons, are they are not having any family? … And Fred I said, Oh god I am not going to get any grandchildren. I was desperate. I love children really, but er mind you sometimes when they were young we used to mind them, but I was always glad to see them away (laughs) sometimes you know. Some brah memories.

(Woman interviewed in 2009, aged 81, becoming a grandmother for the sixth time)