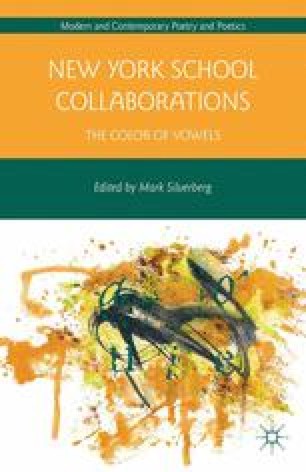 The Vermont Notebook (1975), with text by John Ashbery and drawings by Joe Brainard, has been overshadowed by Self-Portrait in a Convex Mirror, which was also published in 1975, and went on to win the Pulitzer Prize, the National Book Award, and the National Book Critics Circle Award. A riff on the American travelogue (Ashbery notes “most of it was written on a bus”); a tour of the everyday (with nods to Stein’s Tender Buttons, Williams’s Spring and All, Stevens’s “Man on the Dump,” Eliot’s Waste Land, Duchamp’s readymades, and Warhol’s pop art); a mutating experiment in form (including Whitmanian catalogs, prose poems, lyrics, postcards, the collaging of found texts, and the recycling of old poems); a curiosity cabinet of the American vernacular; an urban pastoral; a rendering of homoerotic desire; and a self-reflexive meditation on collections and trash, dumps and dumping: in short, the text of The Vermont Notebook is capacious in form and content. John Shoptaw astutely suggests that the Notebook “looks like a wastebasket for all the extraneous poetic matter ruled out by its famed contemporary” (14). Ashbery’s comment at the beginning of Three Poems-“I thought that if I could put it all down, that would be one way. And next the thought came to me that to leave all out would be another, and truer, way” (3)-suggests an aesthetic approach that was played out across these two 1975 books. That one book has garnered major awards while the other has received comparatively little attention is symptomatic of what the critical establishment values, and of Ashbery’s ability to move between margin and center.1 The Vermont Notebook is a fascinating book on its own terms, and when read in conversation with Self-Portrait indicates Ashbery’s interest in and varied adaptations of a surrealist approach to word and image.

Motion Sickness Everyday Object Distant Reality Double Image Convex Mirror
These keywords were added by machine and not by the authors. This process is experimental and the keywords may be updated as the learning algorithm improves.

“Most days / you can’t even rub a piece of charcoal / across paper laid on some rough wood / without a lion appearing, a fish’s umbrella / skeleton.”