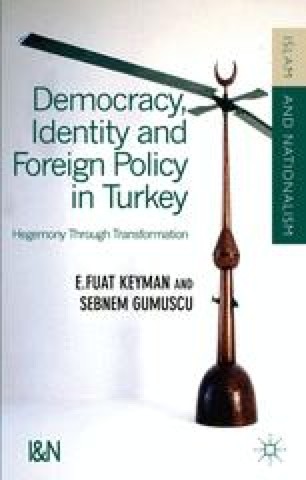 Democracy, Identity, and Foreign Policy in Turkey pp 44-69 | Cite as

This chapter discusses the implications of AKP’s hegemony for democratic consolidation in Turkey and argues that the power of the AKP, stemming from its transformative role in Turkey’s modernization and globalization, has not paved the way to consolidation of democracy, despite the initial democratic reforms the party implemented in its first term in office. On the contrary, the more the AKP has become powerful, the more its relation to democracy has become instrumental and majoritarian. Its electoral hegemony helped the party to successfully challenge the balance of power between the state and the government, evident in the process of civilianization; yet the same electoral hegemony also allowed the party to monopolize power and eliminate checks over it. Moreover, the AKP has not furthered and upgraded Turkish democracy by making it more pluralistic and participatory; instead, the AKP experience has involved what can be called the “instrumentalization of democracy”; first, by reducing democracy to parliamentary majoritarianism, second, by privileging a specific and religious right-claims and freedoms over the others, even to the degree of discrimination. 1 Hence democracy deficit characterized one of the main dimensions of the AKP experience, clearly evident in democratic erosion in key areas such as freedom of expression, information, assembly, and association, demonstrating that the normative commitment to democracy and the strong will for consolidating Turkish democracy constitute the limit of this experience.

Foreign Policy Power Fusion Military Coup Incumbent Party State Elite
These keywords were added by machine and not by the authors. This process is experimental and the keywords may be updated as the learning algorithm improves.
This is a preview of subscription content, log in to check access.