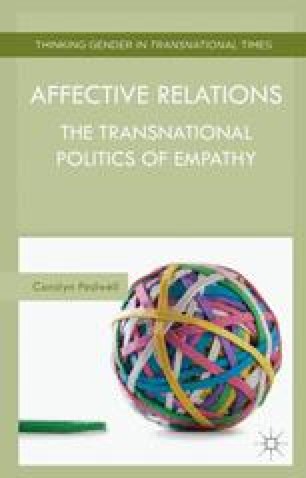 Empathy is invoked by President Barack Obama throughout his political memoirs and speeches as both central to his politics and vital to the creation of a more unified, just and socially responsible America. As Obama tells readers of The Audacity of Hope, ‘I find myself returning again and again to my mother’s simple principle — “How would that make you feel?” … It’s not a question we ask ourselves enough, I think; as a country, we seem to be suffering from an empathy deficit’ (2006a: 67). Cultivating ‘a stronger sense of empathy’, Obama argues, would ‘tilt the balance of our current politics in favor of those people who are struggling in this society’, both inside and outside the nation (67–8). This link between empathy and social justice has been long discussed within feminist and anti-racist social theory. Jacqui Alexander and Chandra Talpade Mohanty argue, for example, that in a contemporary world order structured by transnational capital, ‘engagement based on empathy’ is integral to processes of fostering ‘social justice’ and ‘building solidarity across otherwise debilitating social, economic and psychic boundaries’ (1997: xlii). Writing more recently, Breda Gray contends that critical empathetic engagement ‘can bring emotion, ethics and politics together to facilitate contextually-sensitive, contingent and, hopefully, politically effective feminist solidarities’ (2011: 207).

Social Justice Emotional Intelligence Affective Relation Italic Mine Black Nationalist
These keywords were added by machine and not by the authors. This process is experimental and the keywords may be updated as the learning algorithm improves.
Download to read the full chapter text