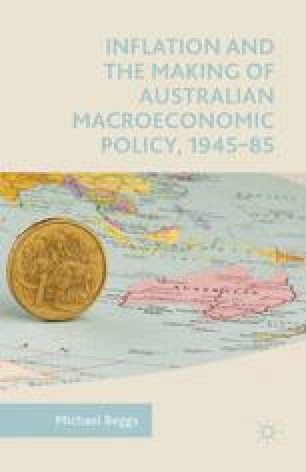 This book has traced the history of Australian macroeconomic policy from one policy ‘revolution’ to the cusp of another. As discussed in Chapter 1, it is undeniable that World War II marks a major break in policy continuity. (The extent to which it should be described as ‘Keynesian’ is a more complicated question (Leijonhufvud, 1968; Robinson, 1973; Chick, 1983, pp. 1–12; Laidler, 1999).) Governments and policymakers accepted responsibility for the pursuit of price stability and full employment, while re-committing to a fixed exchange rate. The new discipline of macroeconomics helped to organise policy coherence, however imperfectly. In Australia, the size of the public sector relative to the economy jumped during the war, and the Commonwealth Bank was granted central banking powers, which were continued for peacetime in the 1945 banking legislation. So policy now had more capacity to act macroeconomically, along with the economic theory to guide its strategy.

Exchange Rate Monetary Policy Central Bank Real Wage Full Employment
These keywords were added by machine and not by the authors. This process is experimental and the keywords may be updated as the learning algorithm improves.
This is a preview of subscription content, log in to check access.