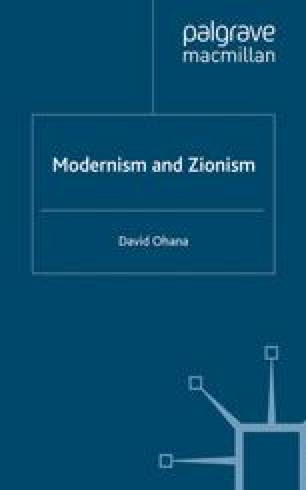 Zionism was a three-dimensional project. It was a political movement arising at the turn of the nineteenth and twentieth centuries (modernity as a historical category), setting itself the aim of creating a nation-state for the Jews dispersed in their dif­ferent diasporas. It was a national ideology that was operative in all areas of Jewish art and culture (modernism as an aesthetic category) in Europe, in the Yishuv (the Jewish community in Palestine) in the first half of the twentieth century and later in the State of Israel that was established in 1948. Finally, Zionism developed politi cal and economic institutions, undertook the building of settlements and initiated scientific and technological projects (modernisation as a sociological, economic and scientific category) in the Yishuv, and in the State of Israel. The result — the State of Israel — grew out of the contexts of modernity, modern­ism and modernisation, which developed together with the Zionist movement in Europe.

Jewish Community National Culture Zionist Movement Jewish People Jewish History
These keywords were added by machine and not by the authors. This process is experimental and the keywords may be updated as the learning algorithm improves.
This is a preview of subscription content, log in to check access.