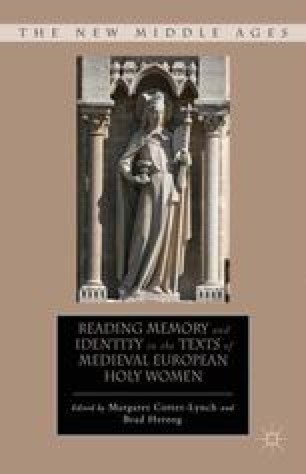 Imitating the Imagined: Clemence of Barking’s Life of St. Catherine

One of the most astonishing moments in Clemence of Barking’s Life of St. Catherine occurs in the opening lines of the text. Before beginning her narrative of Catherine’s vita, Clemence declares her intention to “translater la vie,/De latin respundre en rumanz/Pur ço que plus plaise as oianz” (31–34; to translate the life, expounding it from Latin into the vernacular, in order to please more those who hear it).1 With this self-assured statement, Clemence, a cloistered twelfth-century female writer, authorizes herself as a participant in the hagiographical tradition and proclaims herself qualified to pass critical judgment on the literary and aesthetic merits of previous (and presumably male-authored) versions of Catherine’s life. This bold strategy of self-authorization is the hallmark of Clemence’s text, suffusing the Life’s form, content, and, ultimately, devotional and theological implications. Many of Clemence’s modern critics have focused on her declaration of translatio, evaluating and commenting on her translation and transmission of Catherine’s vita. Clemence, however, focuses on the contemporary readers who receive her version of Catherine’s life. The very syntax of the lines reinforces her authorial investment: Clemence moves sequentially from the act of translating (“translater la vie”) to the method of translation (“de latin respundre en rumanz”), finally finishing the statement with a new clause (“Pur ço que plus plaise as oianz”), which emphasizes those (“oianz”) engaged with the text as readers and listeners.

Source Text Direct Discourse Textual Production Public Speech Courtly Love
These keywords were added by machine and not by the authors. This process is experimental and the keywords may be updated as the learning algorithm improves.
This is a preview of subscription content, log in to check access.