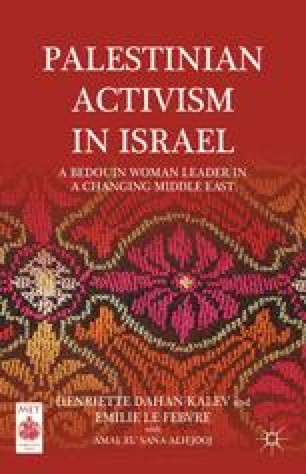 In the last chapter we briefly discussed that the ideal of asl is an important value for al-Naqab Bedouin’s society for differentiating themselves from others. We highlighted the importance of blood, tribal affiliation, and kinship ideologies for distinguishing between those who claim Bedouin origins as opposed to those who do not. However, the notion of aṣl also confers other virtues that play an important role in framing individual experiences and orienting social actions and internal relationships in Bedouin societies throughout the Middle East (Abu Lughod [1986] 2000). The importance of genealogically—referenced social relations among pastoral nomadic peoples—is a popular subject among anthropologists of the region (Ayoub 1959, Barth 1962). Over the past century, patrilineality and the enduring importance of kinship in determining the behavior, values, and social standing of individuals in Bedouin societies have been well studied, documented, and debated (Abu Zeid 1966). Like many cultures in the Middle East, kinship ideology shapes individual orientations and the management of everyday social relations in al-Naqab Bedouin society; therefore, it is the idiom through which they interact in their social world and bifurcate their social arena into kin and non-kin, family/outsiders, privacy/public space (Abu Lughod [1986] 2000).

Middle East Moral Worth Arab Woman Male Family Member Moral Space
These keywords were added by machine and not by the authors. This process is experimental and the keywords may be updated as the learning algorithm improves.

To be a girl in this society it takes a lot of strength and you need to be strong. Despite my father’s disappointment, it produced a challenge inside me to prove to them that although I am a girl, I can still change things like a man.