Male Rape is a Feminist Issue 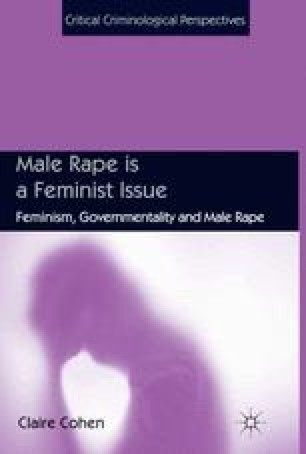 Foucault highlights the significance of ironies to the circulation of power within the social body, stating that ‘people know what they do; they frequently know why they do what they do; but what they don’t know is what what they do does’ (Foucault, personal communication cited in Dreyfus and Rabinow, 1982, p. 187). This is not just a casual criticism of those operating in ignorance; it is also a blistering condemnation of those operating from positions of ‘expertise’. Thus, the generation and promulgation of unintended, deleterious consequences has been a recurrent thematic in this book. In this way, ironies are regarded as key to governmentality and, in this way, I have argued that the gendering of rape and the continued legitimization of the ideal victim binary as a rationale should not be regarded as indicative of any failure, per se; but instead should be taken to illustrate the success of governmentality in the deployment of gender. This necessitates that we ‘think differently’, not just about the ‘evidence’ produced nor about the ‘knowledge’ generated but moreover about the role and function of polemical debate in this area, lest we persist in producing knowledge in this well-worn vein that continues to bear traces of the ‘dust in [our] eyes and dust on [our] fingers’ (Foucault, 1997, p. 50).

Rape Myth Female Victim Hegemonic Masculinity Male Victim Feminist Issue
These keywords were added by machine and not by the authors. This process is experimental and the keywords may be updated as the learning algorithm improves.
This is a preview of subscription content, log in to check access.