Women of Letters, Manuscript Circulation, and Print Afterlives in the Eighteenth Century 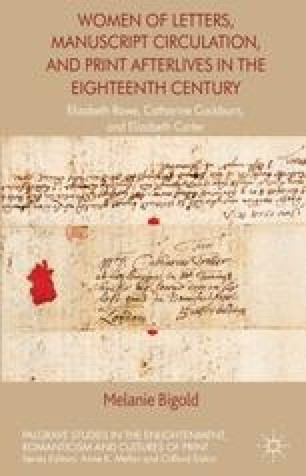 Women of Letters, Manuscript Circulation, and Print Afterlives in the Eighteenth Century pp 169-212 | Cite as

Elizabeth Carter: ‘a very extraordinary Phaenomenon in the Republick of Letters’

Chapter
Part of the Palgrave Studies in the Enlightenment, Romanticism and Cultures of Print book series (PERCP)

Elizabeth Carter (1717–1806) was one of the most acclaimed female writers of her day. Given the equivalent of a university education by her father, the perpetual curate of Deal Chapel, Carter’s early literary precocity and learning prompted Samuel Johnson to claim that ‘she ought to be celebrated in as many different languages as Lewis Le Grand’.397 By the time her poem, ‘Ode to Wisdom’, had been enshrined in Samuel Richardson’s Clarissa (1747–8), Carter had already established a solid literary reputation based upon her poetic contributions to the Gentleman’s Magazine, a small volume of poetry entitled Poems on Particular Occasions (1738), and two translations: Sir Isaac Newton’s Philosophy Explain’d for the Use of the Ladies (1739)398 (from the Italian of Francesco Algarotti) and An Examination of Mr Pope’s Essay on Man, From the French of M. Crousaz (1739). Carter’s subsequent translation from the Greek of All the works of Epictetus (1758) garnered her critical acclaim and financial independence. Her second volume of poetry, Poems on Several Occasions (1762), further secured her status as one of the most eminent women of letters of the latter half of the century.

Eighteenth Century Literary Career Woman Writer Female Writer Print Culture
These keywords were added by machine and not by the authors. This process is experimental and the keywords may be updated as the learning algorithm improves.

This lady is a very extraordinary Phaenomenon in the Republick of Letters, and justly to be rank’d with the Cornelia’s, Sulpicia’s, and Hypatia’s of the Ancients, and the Schurmans and Daciers of the Moderns. For to an uncommon Vivacity and Delicacy of Genius and an Accuracy of Judgment worthy of the maturest Years, she has added the Knowledge of the ancient and Modern Languages at an Age, when an equal Skill in any one of them would be a considerable Distinction in a Person of the other Sex.396

Cite this chapter as:
Bigold M. (2013) Elizabeth Carter: ‘a very extraordinary Phaenomenon in the Republick of Letters’. In: Women of Letters, Manuscript Circulation, and Print Afterlives in the Eighteenth Century. Palgrave Studies in the Enlightenment, Romanticism and Cultures of Print. Palgrave Macmillan, London. https://doi.org/10.1057/9781137033574_6