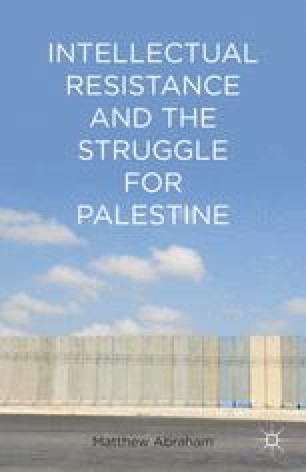 Edward Said, the Question of Palestine, and the Continual Quest for Intellectual Freedom

As mentioned in the previous chapter, Ari Shavit of Israel’s leading daily newspaper Ha’aretz spent three days in New York interviewing Edward W. Said in the summer of 2000. In this interview, which was— in Said’s words— “eminently fair” and accurately reproduced in print throughout Israel— he traced the events surrounding the 1947–1949 expulsions of nearly 800,000 Arab inhabitants in an area known simply as “Palestine,” culminating in the birth of Israel.1 He also stressed the necessity of acknowledging what so many are pained to admit: the existence of nearly three million people, currently living under military occupation, who share among themselves the “Palestinian” identity, an identity that— while continuously contested— represents a suffering and tragic dispossession that stands at the very heart of the present Middle East conflict.

Collective Memory Scholarly Production Palestinian Authority Military Occupation Intellectual Freedom
These keywords were added by machine and not by the authors. This process is experimental and the keywords may be updated as the learning algorithm improves.
This is a preview of subscription content, log in to check access.

Cite this chapter as:
Abraham M. (2014) Edward Said, the Question of Palestine, and the Continual Quest for Intellectual Freedom. In: Intellectual Resistance and the Struggle for Palestine. Palgrave Macmillan, New York. https://doi.org/10.1057/9781137031952_4