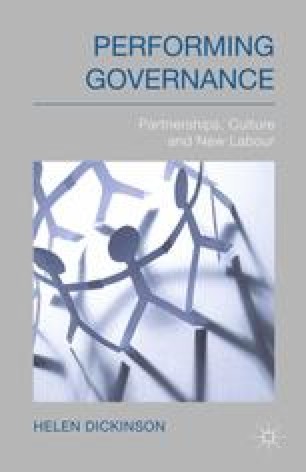 This chapter aims to provide an overview of two concepts that were key to the New Labour project: partnership and modernisation. New Labour were elected under a promise that they would modernise not just government and public services but also politics itself. Partnership was one of the tools they would do this through and became an almost constant feature of New Labour discourse. There was a period of time in British political life where partnership seemed to be the answer to any given situation, and the only way of securing any new funding was to promise that this would be designed and/or delivered in partnership with other agencies.

Public Service Service User Social Enterprise Labour Government Labour Party
These keywords were added by machine and not by the authors. This process is experimental and the keywords may be updated as the learning algorithm improves.
This is a preview of subscription content, log in to check access.