Democracy and Schooling in California 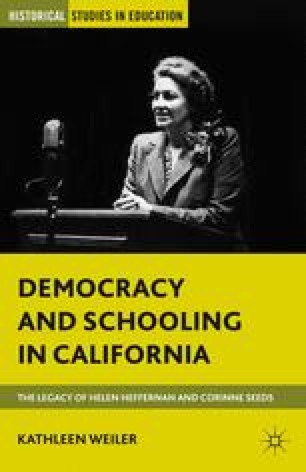 Democracy and Schooling in California pp 1-18 | Cite as

Working Girls of the Golden West

Corinne Seeds and Helen Heffernan were born seven years apart—Seeds in 1889 and Heffernan in 1896. Both were born into families in which women were expected to work, and both spent their formative years in the American West. Corinne Seeds was born and lived until she was sixteen in Colorado Springs, Colorado; her father, Sherman, was a carpenter and her mother, Mary, had been a teacher. Helen Heffernan was born in the industrial city of Lawrence, Massachusetts, the youngest of the seven living children of Michael and Margaret Heffernan. Her father, a brick mason, died when she was a child of six. In 1906, when she was ten, she moved with her widowed mother, older brothers, and sister across the continent to the mining town of Goldfield, Nevada, where she attended high school. Both Corinne Seeds and Helen Heffernan grew up in western towns at a time when ideas of the frontier were being challenged by rapid social and technological change.1 Colorado Springs and Goldfield were in some sense defined by older imaginings of the western frontier, but they were in fact intimately tied to developments in global capitalism and were sites of two of the most radical labor movements in the mining West. Colorado Springs, Colorado, in the 1890s was well known as a health resort that attracted wealthy visitors from the East and from Europe, but it was also the financial center for the nearby mining district of Cripple Creek, the site of one of the richest gold strikes and the most violent labor struggles in the history of the United States.

Teacher College Oral History Normal School Public High School Health Resort
These keywords were added by machine and not by the authors. This process is experimental and the keywords may be updated as the learning algorithm improves.
This is a preview of subscription content, log in to check access.