The State and the Private Sector in Latin America 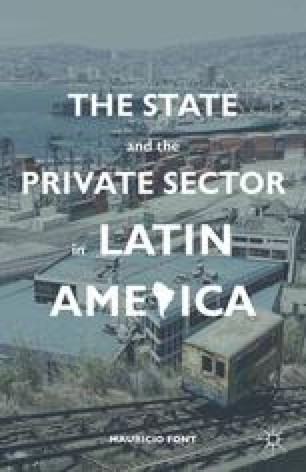 State and Market in Global Development

The state has been implicated in major transformations since the last third of the twentieth century, though there is hardly full agreement on this role. In the study of globalization, the nation-state remains a major point of contention; while globalists link globalization to lesser roles for national governments, skeptics posit the latter’s enduring centrality (Held and McGrew, 2007; Fritz and Menocal, 2006; Hollingsworth and Boyer, 1997; Baccaro and Howell, 2011).1 Similarly, the fields of development and post-socialism contrast the dynamics and relative merits of state-centered and market-driven models of social transformation (Evans, 1995). Studies focusing on “varieties of capitalism” in Europe distinguish between state-coordinated regimes and the liberal polities in which markets are presumed as central (Hall and Soskice, 2001; Thelen, 2012). In turn, policymakers working within alternative approaches to governance hold in high esteem the specific impact and policy issues associated with them.

Private Sector Global Development Trade Expansion Private Sector Participation Import Substitution Industrialization
These keywords were added by machine and not by the authors. This process is experimental and the keywords may be updated as the learning algorithm improves.
This is a preview of subscription content, log in to check access.