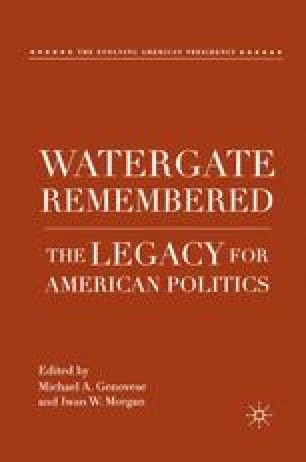 Watergate destroyed the presidency of Richard M. Nixon. Entailing far more than the cover-up of the botched burglary of the Democratic National Committee (DNC) offices on June 17, 1972, it was the generic name that encompassed all the serious crimes and misdemeanors of the Nixon White House. From early 1973 until Nixon’s resignation on August 9, 1974, to avoid almost certain impeachment, the nation was shocked by the steady stream of revelations about the misconduct of the president and his men. Time magazine called Watergate “America’s most traumatic political experience of this century.” Looking to declare an end to this sad episode in the nation’s history, Gerald Ford offered this assurance on the day he took office as Nixon’s successor: “My fellow Americans, our long national nightmare is over.”1

Grand Jury National Security Council Judiciary Committee Dirty Trick National Security Adviser
These keywords were added by machine and not by the authors. This process is experimental and the keywords may be updated as the learning algorithm improves.

David Frost: “Can [the president] decide that it’s in the best interests of the nation…, and do something illegal?”

Richard Nixon: “Well, when a president does it, that means that it is not illegal.”

Exchange in the Nixon-Frost television interview, 1977

“The president is always right.”