Theory and Application of the “Generation” in International Relations and Politics 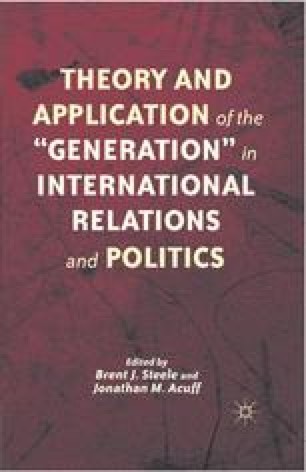 The “Problem of Generations” Revisited: Karl Mannheim and the Sociology of Knowledge in International Relations

Karl Mannheim is a ubiquitous reference in scholarly work on generations, yet the usefulness of his essay “The Problem of Generations” as a basis for social scientific research is highly contested.2 For some, it is an “undervalued legacy,” one that demonstrates the importance of generations in social life and offers invaluable guidance to their proper conceptualization.3 But for others, Mannheim fails to define the generation with any great precision. He thus conflates the impact of generations with age- and cohort-effects,4 leaving underspecified the links between generations and other social factors, including class.5 Political scientists have also shown that generational membership and generational shifts do not always predict political views with great accuracy, placing further doubt on the appropriateness of a generational account of political change.6 As a result, while he is widely acknowledged as the father of generational analysis, Mannheim’s essay is frequently cited, but just as frequently ignored.7

Political Science Foreign Policy International Relation Generation Unit Rockefeller Foundation
These keywords were added by machine and not by the authors. This process is experimental and the keywords may be updated as the learning algorithm improves.

Thus far have I come and no further: the rest I leave to my successors.

—Karl Mannheim, Man and Society in an Age of Reconstruction

1. I would like to thank Michael McQuarrie and Stephanie Lee Mudge of the University of California-Davis, for useful conversations on the themes of Karl Mannheim and Pierre Bourdieu, and to Jon Acuff and Brent Steele for their insightful comments on an earlier draft of this chapter.