Women and Leadership in West Africa 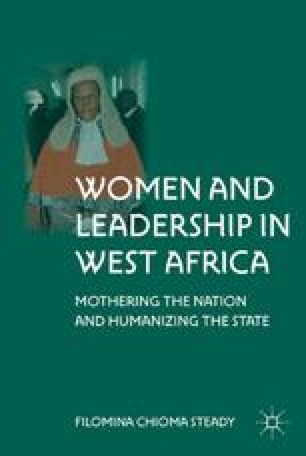 Women and Leadership in West Africa pp 39-52 | Cite as

The Mano River Union (MRU) was established as an instrument of regional cooperation consisting of Guinea, Liberia, Sierra Leone, and Côte d’Ivoire (Ivory Coast). It was founded in 1973 with two countries, Liberia and Sierra Leone. Guinea joined in 1980. It is a subregional and bilingual organization with English and French as official languages. This study does not include Côte d’Ivoire, due to its fairly recent membership of the Union in 2008. The study focuses instead on the countries that have been members for a longer period, and that have built a subregional relationship and structures for several years. The chair of the MRU is President Ellen Johnson Sirleaf of Liberia. Its Secretary-General is Thierno Habib Diallo of Guinea, and his deputy is Linda Koroma of Sierra Leone. The headquarters is in Freetown, Sierra Leone. A profile of Linda Koroma is presented below.

Leadership Position Human Trafficking Child Soldier Peace Process Woman Refugee
These keywords were added by machine and not by the authors. This process is experimental and the keywords may be updated as the learning algorithm improves.
This is a preview of subscription content, log in to check access.