The French Enlightenment and Its Others 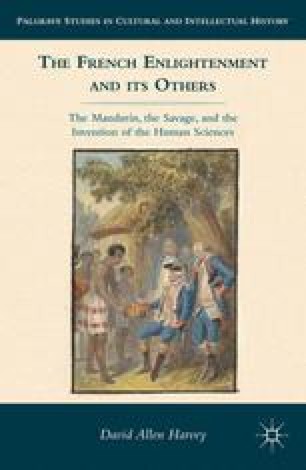 The French Enlightenment and Its Others pp 155-182 | Cite as

“An Indelible Stain”: Slavery and the Colonial Enlightenment

Writing of the need to preserve strict legal segregation and white supremacy in the colonial Caribbean, the jurist Michel-René Hilliard d’Auberteuil declared that “self-interest and security demand that we burden the black race with such great scorn that whoever descends from it, down to the sixth generation, be covered by an indelible stain.”1 To the eyes of some contemporary critics, however, it is the French Enlightenment’s own alleged indifference to the moral outrage of slavery that casts an “indelible stain” on its legacy. Louis Sala-Molins has declared that “the crucial test for the Enlightenment is the slave trade and slavery,”2 while Michèle Duchet has denounced the “myth of the anti-colonialism of the philosophes,” arguing that their halfhearted reformism merely “contributed to the maintenance of the established order.”3 On the other hand, Jean Ehrard has sought to defend the philosophes against charges of complicity in slavery, arguing instead that, while they did not have the power to free the slaves, their works made possible the rise of an antislavery movement in the final years of the Old Regime.4

Eighteenth Century French Society Slave Trade Free Labor African Slave
These keywords were added by machine and not by the authors. This process is experimental and the keywords may be updated as the learning algorithm improves.
This is a preview of subscription content, log in to check access.

Cite this chapter as:
Harvey D.A. (2012) “An Indelible Stain”: Slavery and the Colonial Enlightenment. In: The French Enlightenment and Its Others. Palgrave Studies in Cultural and Intellectual History. Palgrave Macmillan, New York. https://doi.org/10.1057/9781137002549_7