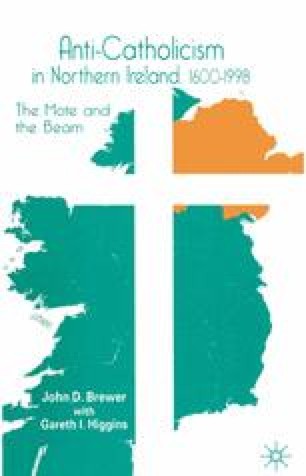 In an analysis of ethnic differentiation in Northern Ireland, Richard Jenkins, one of its foremost analysts, claimed that local Protestants had used ethnicity as ‘a social resource’ in their dominance (Jenkins, 1997: 90), and while he rightly renders ethnicity in its Northern Irish expression to be manifested by religion, he dismisses anti-Catholicism as an expression of ethnic conflict because doctrinal differences have not everywhere produced conflict on the scale of Northern Ireland (ibid.: 112). This is not the point: anti-Catholicism in some settings is, indeed, much more than doctrinal differences but a sociological account is needed to distinguish these occasions from settings where the differences remain theological. In ‘situational’ theories of ethnicity, ethnic boundaries are not genetic or kinship based, but locally determined and appropriated contextually whenever ethnically based mobilisation occurs. Modern cultural studies have shown the vast array of cultural resources used in constructing identity, including national and ethnic identity (Hall and du Gay, 1996; Woodward, 1997). Anti-Catholicism has been used as a resource in localised and situational circumstances, such as in Britain between the seventeenth and nineteenth centuries, where it was mobilised in different sorts of conflicts, and in Ireland. The imperative is to explain why theological and doctrinal differences took on such sociological import in Northern Ireland and why they have continued to do so when they have diminished in saliency elsewhere.

Religious Affiliation Religious Difference Protestant Politics Social Closure Social Cleavage
These keywords were added by machine and not by the authors. This process is experimental and the keywords may be updated as the learning algorithm improves.
This is a preview of subscription content, log in to check access.