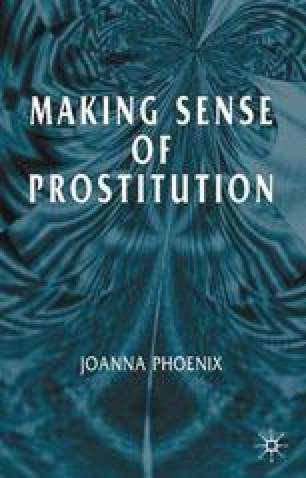 This book is about women like Katrina, who at the age of eighteen was released from the secure psychiatric unit she had been placed in when she was 13 years old. She had no home of her own, no family or friends to support her, no job, no educational qualifications or marketable skills and no prospect of legitimate employment. That same year she began work as a prostitute and for the next two years she worked more or less full time. When asked about it, Katrina claimed that her entrance into and continuation in prostitution were the result of a consciously taken decision. Katrina asserted that, like most other women, she was simply trying to survive. Prostitution enabled her to earn enough money to support herself without recourse to crime and the possibility of imprisonment, to house herself, to avoid living on state swelfare benefits or in poverty, and to provide herself with the financial basis to be independent and live life the way that she wanted. By her own account then, Katrina’s involvement in prostitution provided her with a means of overcoming poverty, fashioning a better and more independent life for herself and securing economic and social stability.

Minority Ethnic Group Sexual Service Discursive Strategy Autobiographical Narrative Public Nuisance
These keywords were added by machine and not by the authors. This process is experimental and the keywords may be updated as the learning algorithm improves.
This is a preview of subscription content, log in to check access.