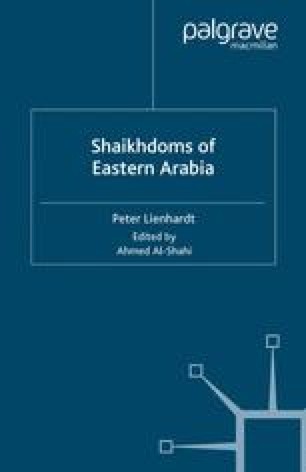 All the towns of the Trucial Coast lie on the seashore and have depended for their existence on the sea rather than the desert. Nevertheless, even now, in spite of all the new building that is going on, they retain a desert flavour, different from those Middle Eastern towns and cities where a large peasant population intervenes between bedouin and urban life and provides the strongest element in urban recruitment. In Eastern Arabia the desert sand runs straight down into the sand of the beaches: the coastal towns are desert towns and ports at the same time. There are towns where bedouin move with ease and confidence – bedouin who in the past played a part in the life of the sea, just as townsmen made sorties with their camels into the desert. Towns have grown up in places where there have been anchorages and some fresh water of however poor a quality. Some of them are sited in positions which afford natural defence against land attack.

Date Palm Crew Member Fishing Industry Fishing Boat Capital Equipment
These keywords were added by machine and not by the authors. This process is experimental and the keywords may be updated as the learning algorithm improves.
This is a preview of subscription content, log in to check access.