The Politics of Nationhood 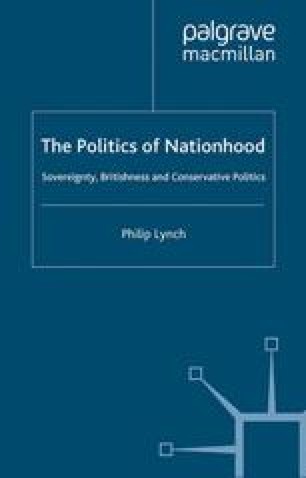 Since the mid-1980s Britain’s role in a European Community and then European Union intent for the most part on ‘ever closer union’ has been a central issue in Conservative politics, posing a number of significant challenges for party statecraft. Following EC entry in 1973 and the self-imposed exile of its chief opponent Enoch Powell, the Conservatives appeared largely at ease with the twin mantles of ‘party of Europe’ and national party, but membership had not brought about a major reordering of the politics of nationhood. By the 1990s many in the party believed that support for European integration was incompatible with its commitment to the nationstate and national identity.

European Integration European Central Bank National Sovereignty Single Currency Conservative Politics
These keywords were added by machine and not by the authors. This process is experimental and the keywords may be updated as the learning algorithm improves.
This is a preview of subscription content, log in to check access.