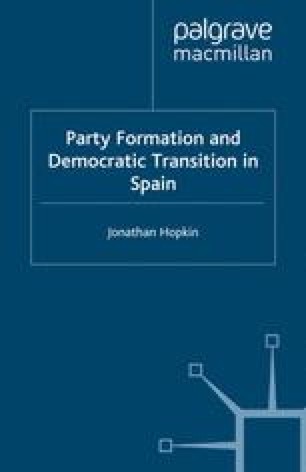 The UCD in June 1977 was an electoral coalition of several juridically recognised political formations. The disintegration of such a coalition would seem to require little explanation. However, by October 1978 the coalition had been transformed into a unitary party, with the support, or at least the acquiescence, of all the component groups. This chapter explains how resistance to unification was overcome, paying particular attention to the strength of Suárez’s leadership and the exceptional circumstances of the constituent period. The chapter also explores the process of party organisational expansion, showing how Suárez was able to formalise his dominant position and relegate the leaders of the original coalitional parties to a marginal role in the new organisation.

Executive Committee Democratic Transition Party Organisation Municipal Election Party Congress
These keywords were added by machine and not by the authors. This process is experimental and the keywords may be updated as the learning algorithm improves.
This is a preview of subscription content, log in to check access.