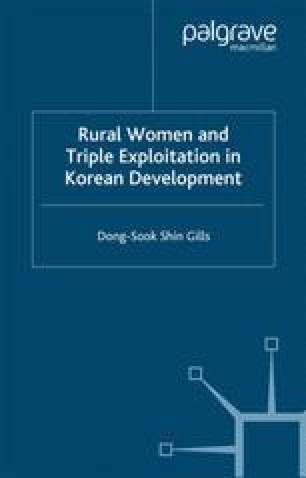 In the early hours of a cold grey morning in November 1997 I was travelling on a train from a typical farming village into the great city of Seoul. After over four decades of rapid industrial development, much has changed for most people in South Korea, but some things seemingly never change. I saw that, as ever, the peasant woman still departs her home at dawn carrying a great heavy bundle of agricultural produce on her head. She scrambles into the cheapest dirty train to find a seat to rest her tired body and catch up on lost sleep. Her face is the same prematurely old and weatherbeaten one as was her mother’s forty years before. In her half-sleep on the noisy train she prays that she can sell her vegetables at a better price than last time. At the end of a weary day hawking her goods in the market-places of Seoul she will come home with a hope that her daughter will not have the same life as she has lived.

Rural Woman Village Woman Peasant Woman Village Survey World Economic System
These keywords were added by machine and not by the authors. This process is experimental and the keywords may be updated as the learning algorithm improves.
This is a preview of subscription content, log in to check access.