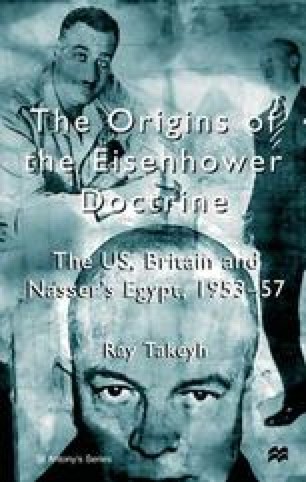 The Suez Crisis fundamentally altered the political alignments of the Middle East. Throughout the Arab world the influence of the primary Western state, Great Britain, had ebbed to the point of non-existence, while the nationalist forces were emboldened and poised to assume control. As significant as the altered relationships may have been, they did not impact the objectives of the Eisenhower administration. The United States was still committed to mobilizing the Middle East for the task of containment by reducing Egyptian influence. However, the achievement of this goal required a more activist policy than previously pursued.

Saudi Arabia Middle East Arab World Arab State Regional Ally
These keywords were added by machine and not by the authors. This process is experimental and the keywords may be updated as the learning algorithm improves.
This is a preview of subscription content, log in to check access.