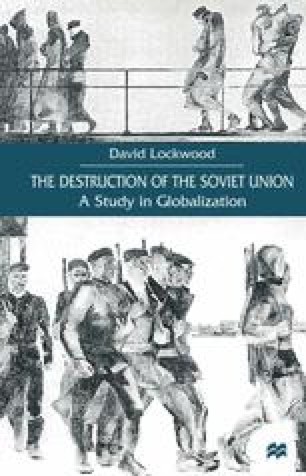 The Destruction of the Soviet Union pp 5-23 | Cite as

Historical Materialism and the State

In 1977, Bob Jessop declared that ‘nowhere in the Marxist classics do we find a well formulated, coherent and sustained theoretical analysis of the state.’ He went on to outline no less than six different approaches in the classical texts, each of which involved different assumptions and gave rise to different political conclusions.1 The best known of the ‘classical’ formulations was expressed (in an extremely condensed form) by Marx and Engels in The Manifesto of the Communist Party, in which they concluded: ‘The executive of the modern representative state is but a committee for managing the common affairs of the whole bourgeoisie.’ In Anti-Dühring, Engels reiterated the point:

The modern state, no matter what its form, is essentially a capitalist machine, the state of the capitalists… 2

Productive Force Capitalist Development Capitalist System Historical Materialism Relative Autonomy
These keywords were added by machine and not by the authors. This process is experimental and the keywords may be updated as the learning algorithm improves.
This is a preview of subscription content, log in to check access.