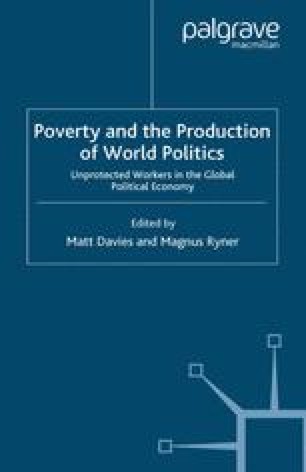 Venezuela’s poor make up core of political support for the populist President Hugo Chavez. Chavez has not only used income from oil exports to provide the poor with basic services, he has also pursued a foreign policy that is explicitly independent of US interests in the region. Urban marginals in Morocco, living in shantytowns known to locals as ‘Chechnyas’, have embraced violent strands of Islam, taking their inspiration from factions of the Muslim Brothers of Egypt and the Groupe Islamique Armée of Algeria. It is likely that they were involved in the train bombings in Madrid in March 2004 and were certainly behind the suicide bombings in Casablanca on 16 May 2003 (Belaala, 2004). According to research by the International Crisis Group (ICG, 2004) the ‘Mahdi Army’ in Iraq not only has a similar political disposition but also has a similar social base in shantytowns such as Baghdad’s Sadr City. UN data indicate that if it has not already come to pass, the world is on the verge of becoming primarily urban. Davis (2004) has shown that while some cities do continue to follow the nineteenth-century pattern of urbanization led by industrialization, most contemporary urbanization is taking place in ‘second tier’ deindustrializing cities that are unable to provide basic services to newly arrived poor migrants. Poverty has become an unavoidable theme in world politics.

World Order World Politics Global Civil Society Global Poverty Global Politics
These keywords were added by machine and not by the authors. This process is experimental and the keywords may be updated as the learning algorithm improves.

The first part of this introduction owes much to joint discussions and drafting with Jeffrey Harrod.