No War, No Peace 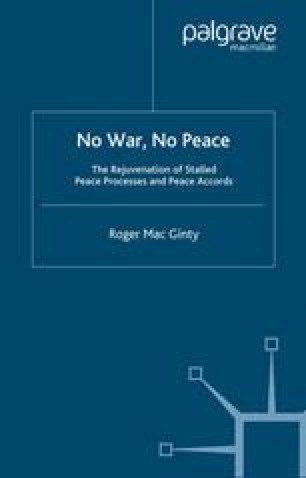 In March 2005, 12-year-old Tamil schoolgirl Nagendiram Dushika was knocked down and killed by a speeding military vehicle in Jaffna in the northeast of Sri Lanka. Despite the existence of a ceasefire between the Tamil Tigers and the Government of Sri Lanka, the Jaffna peninsula resembled an armed camp with government troops deployed in large numbers. Friction between local people and the mainly Sinhalese military was common. Frequent road accidents involving military vehicles and allegations of sexual assault against soldiers meant that Jaffna’s ‘peace’ offered only a limited respite from the war. In October 1994, just over a year after the signing of the Declaration of Principles between the Palestine Liberation Organisation (PLO) and the Israeli government, a Hamas suicide bomb killed 22 on a bus in Tel Aviv. During the next 18 months, over one hundred Israelis were killed in suicide attacks, prompting Israel to launch ferocious responses. Such was the ‘peace’ of Oslo. In July 2005, seven years after Northern Ireland’s Belfast Agreement, a Protestant family’s north Belfast home came under attack from a rioting Catholic mob. ‘It’s just because we’re Protestants’, the head of the household said. In 2004, 447 households living in publicly owned property were intimidated from their homes. In 2003, the figure was 685. Such attacks, many of them casual and opportune.

Armed Group Peace Accord Peace Process Direct Violence Suicide Attack
These keywords were added by machine and not by the authors. This process is experimental and the keywords may be updated as the learning algorithm improves.
This is a preview of subscription content, log in to check access.