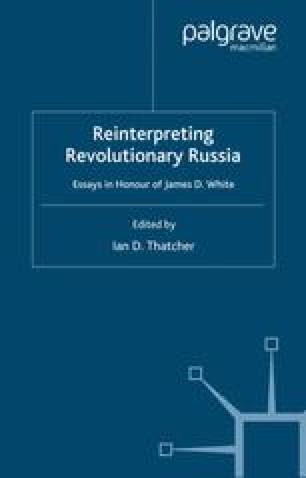 The October Revolution, the Constituent Assembly, and the End of the Russian Revolution

When we say ‘the Russian Revolution’, what time period, and thus what events are we indicating? The answer we give may make a variety of statements, explicitly or implicitly, about our interpretation not only of the revolution, but of modern Russian history. What was the revolution? When did it end? When did it begin? What constituted the Bolshevik seizure of power and what was its nature, meaning, and significance? How does it relate to what is sometimes called ‘the Bolshevik Revolution?’ How does the revolution fit into the broader, tumultuous history of modern Russia? Yet, the many books that have been written about the revolution, often with the words ‘the Russian Revolution’ in the title, cover greatly different time periods and subjects. Rarely, however, do authors address the question of why they use the time period that they do for the revolution. Readers attempting to learn about the Russian Revolution can legitimately feel confused about the subject, given the wide range of time periods encompassed under that title in various books. Just when was it? This essay will examine the issue of the chronological definition of the Russian Revolution, first reviewing briefly some of the periodisations used by historians and then proposing a specific one as ‘the best’. In particular it will argue for a rarely used time, January 1918, and specific event, the dispersal of the Constituent Assembly, as marking the end of the Russian Revolution in the specific sense of the term.

Soviet Government October Revolution Russian Revolution Shared Assumption Socialist Parti
These keywords were added by machine and not by the authors. This process is experimental and the keywords may be updated as the learning algorithm improves.
This is a preview of subscription content, log in to check access.