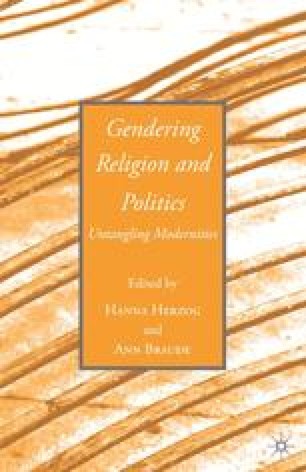 This is an excerpt from one of the interviews that I conducted with Costa Rican Catholic women in 2006 and 2007 on the meaning of the Virgin Mary. It expresses something that I heard in one way or another in most—if not all—interviews: that the Virgin Mary is both like me (another woman) and unlike me (different). I have earlier called this interplay of identification with and differentiation from Mary in women’s devotion to her the “both-and character” of women’s popular Marian piety.’ In this chapter, I bring forth this double meaning of the Virgin Mary for many Catholic women as a critique of a tendency in feminist scholarship on Latin American women to see religion, and more specifically, the Virgin Mary, solely as a source of women’s sufferings and alienation. The quotation summarizes one central tenet in women’s devotion of Mary that is lacking in secular feminist analyses of the influence of Catholicism on women: Mary understands and sustains women, both as a human female, like themselves, and as a powerful divine source of compassion.

Religious Tradition Feminist Scholarship Feminist Critique Repressive State Parking Spot
These keywords were added by machine and not by the authors. This process is experimental and the keywords may be updated as the learning algorithm improves.

For me, (the Virgin) as mother, as the woman that she is, understands women well. She understands us well because she is like us. Only that she is chosen among all the women to be a pure woman, a clean woman, to be the first sanctuary, in which jesus was formed.