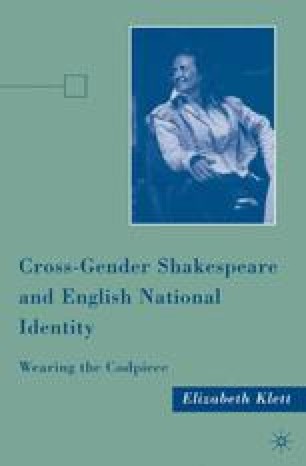 Helena Kaut-Howson’s 1997 production of King Lear, which featured Kathryn Hunter in the title role, followed in Warner and Shaw’s footsteps in certain ways. Kaut-Howson and Hunter, like their predecessors, denied the relevance of feminism and gender issues to their production; yet the meanings created by Hunter’s performance as Lear surpassed their stated intentions. Like Richard II, this King Lear was an experimental production in which the director used cross-gender casting to emphasize the gap between the actress and her role. However, the similarities between the two productions end there; as the primary focus of their production, Kaut-Howson and Hunter created an interpretation of Shakespeare’s tragedy that was rooted in an exploration of the contradictions of King Lear’s critical and performance history, in which “many voices confront each other” (Rosenberg 1972, 5).

National Identity Male Actor Frame Story Daily Telegraph Steel Door
These keywords were added by machine and not by the authors. This process is experimental and the keywords may be updated as the learning algorithm improves.
This is a preview of subscription content, log in to check access.