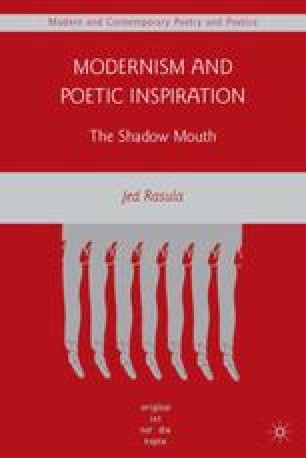 The Murmur: Modernist Alchemies of the Word

Murmur: a word rustling in the thickets of certain propositions about literature, emitting a solemn iridescence. Give it a slight tug, and much of Maurice Blanchot’s theoretical work bunches up around it. It goes back to an exhortation by André Breton, Blanchot’s touchstone in The Infinite Conversation. The Surrealist magus “calls upon the writer to trust in ‘the inexhaustible character of the murmur’” (Infinite 9)1—an “infinite murmur, infinitely disjointed but infinitely renewed” as Philippe Lacoue-Labarthe characterizes it in his own homage to Blanchot (13)—and like an engraving by M.C. Escher in which the same person ascends and descends incommensurable staircases in an otherwise plausible architecture, Breton’s sanction of the murmur radiates through the prism of Blanchot, finally settling into the collective murmur of Tel Quel at that rhapsodic threshold concentrated in the (collectively unsigned) articles of faith enumerated in Théorie d’ensemble (1969), prefacing essays by Barthes, Foucault, Derrida, Kristeva, Sollers, and others. The project of Tel Quel—as journal, as book series, as a contentious intervention in French literary culture launched in the wake of existentialism and the nouveau roman—might be characterized as an attempt to turn “literature” inside out, to expose the social façade of literary institutions to the asocial taunt of language as such, beset by the murmur.

Paradise Lost Phantom Sensation Visual Template Orchestral Music Divine Idea
These keywords were added by machine and not by the authors. This process is experimental and the keywords may be updated as the learning algorithm improves.
This is a preview of subscription content, log in to check access.