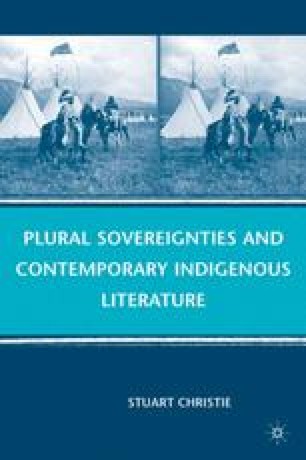 Blood Legacies: Pathology and Power in Works by Sherman Alexie and A. A. Carr

In a consensus reached by bands, tribes, and colonizers alike, the sovereignties indigenous people exercise today in the Anglo-European sphere of control have been largely defined as blood sovereignties. As a result, the representation of blood in contemporary literary works has also emerged as a site of contestation, between the promise of consanguinity sustaining indigenous continuity in recognizably sovereign forms on the one hand, as well as the threat of tainted blood, including the corruption of sovereign traditions, coming from exogamous outsiders on the other. A biological commonplace as well as the “proof” of cultural authenticity, blood is a doubled figure within the colonial imaginary. It confers the power of an indigenous people and its proprietary traditions equally, alongside the potential menace of alienation apart from those same traditions. However blood subjectivity has come to be defined, its representations are intimately associated with the problems and potentials of plural sovereignties.

Mental Illness Indigenous People Indigenous Community Indigenous Culture Psychotic Experience
These keywords were added by machine and not by the authors. This process is experimental and the keywords may be updated as the learning algorithm improves.

We’ve been stuck in place since House Made of Dawn.

Cite this chapter as:
Christie S. (2009) Blood Legacies: Pathology and Power in Works by Sherman Alexie and A. A. Carr. In: Plural Sovereignties and Contemporary Indigenous Literature. Palgrave Macmillan, New York. https://doi.org/10.1057/9780230620759_2