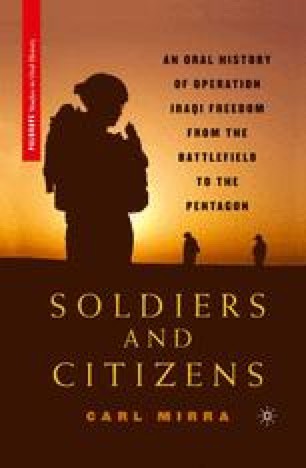 The New Winter Soldiers Redux: The Patriotism of Antiwar GIs

The army recruiter “only told me the great things” about the military, Michael Harmon says as he remembers enlisting in the service. Harmon, a veteran of Operation Iraqi Freedom, saw people “literally split open,” and no longer trusts the U.S. government because the “whole war was a lie.”

Active Duty National Guard Vietnam Veteran Boot Camp Conscientious Objector
These keywords were added by machine and not by the authors. This process is experimental and the keywords may be updated as the learning algorithm improves.

You don’t have to worry about soldiers not wanting to fight, as long as there is good reason for being at war.