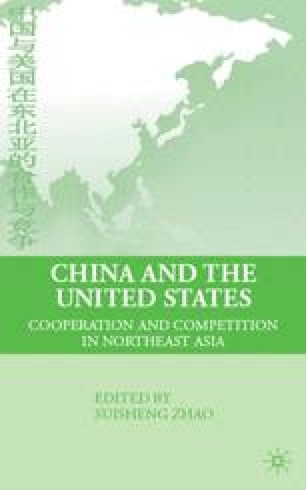 China and the United States pp 1-7 | Cite as

At the Asia-Pacific Economic Cooperation (APEC) Summit held in Australia during September 2007, U.S. President George W. Bush addressed an audience of Pacific Rim business elite to discuss the war on terror, while Chinese President Hu Jintao talked about the business opportunities that China’s growth was producing. One reporter captured this moment and suggested that the messages “underscore how Washington and Beijing are now being perceived in the Asia-Pacific region, where the U.S. role seems to be slipping, while China is seen as the power of the future.” According him, “The terrorist attacks in 2001 and the war in Iraq drew Washington’s attention from Asia, … just as China’s historic reemergence gained critical mass.”1 This suggestion echoed the observation of an article two years earlier: “At gatherings such as APEC’s annual summit, the US is suddenly no longer the only power to which lesser nations pay tribute. Strengthened by the relentless growth of its economy, China wields more influence among its Asian neighbors with every passing year.”2

Bush Administration Asian Neighbor Regional Player American Political System Taiwan Policy
These keywords were added by machine and not by the authors. This process is experimental and the keywords may be updated as the learning algorithm improves.
This is a preview of subscription content, log in to check access.