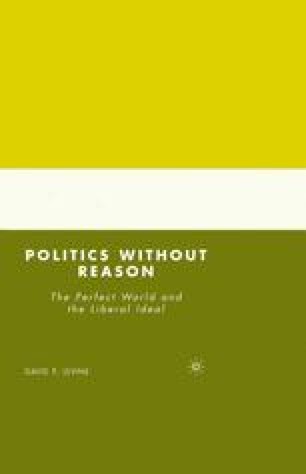 Politics without Reason pp 3-12 | Cite as

In a curious yet effective attempt to cobble together a coalition capable of dominating the political agenda, the Republican Party has lately participated in a redefinition of liberalism as its opposite, while linking a conservative antiliberal cultural agenda centering on issues such as gay marriage and abortion to the one-time liberal policy of free trade and individual rights. Thus, one of the notable remarks offered about their opponent by the Bush-Cheney campaign for the presidency in 2004 was that “John Kerry can run from his liberal record, but he can’t hide.” In elaborating on this message, they emphasized the votes Kerry was alleged to have cast to raise taxes, his allegedly complex and costly program to put government in charge of health care, his tolerance of gay marriage, and his opposition to banning abortion. According to this way of thinking, liberals pose a threat because they seek both to limit and to expand our freedoms. They seek to limit our freedom to pursue wealth while expanding our freedom to satisfy desires other than for wealth.

Free Trade Political Agenda Individual Freedom Republican Party Wealth Accumulation
These keywords were added by machine and not by the authors. This process is experimental and the keywords may be updated as the learning algorithm improves.
This is a preview of subscription content, log in to check access.