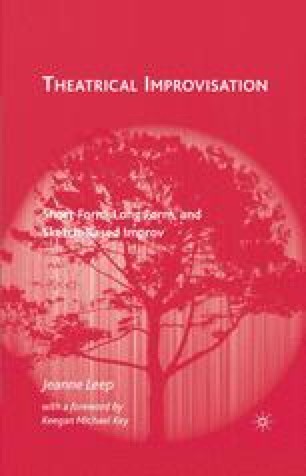 As shown, improvisation in performance exists in three basic forms, yet continues to grow and evolve. Like trees in a forest, seeds of new improvisation forms take root in the fertile soil provided by the work that has gone before. Branches intertwine and sometimes appear to graft together to make the boundaries of various forms less clear. Furthermore, as seen in the case of Chicago, one improvisational company, The Second City, has helped to sow the seeds for other improvisational companies and forms to flourish. Likewise, Johnstone’s short form phenomenon Theatresports has planted new companies across the globe, starting with Canadian cities and quickly spreading to the United States, Europe, and throughout of the world. And long form cultivated by ImprovOlympic, which feeds partly on the roots provided by the sketch-based work of Second City, has now grown into sketch-based work as long form has changed the way sketch-based improvisers think of the presentation of that form. These “trunk” companies provide the two necessary ingredients for new companies to form: actors trained in the craft of improvisation, and an audience that understands and appreciates each specific art form. Like a forest, these companies may have started small, but have grown in density and reach.

Short Form Audience Member Theatre Scene Theatre Company River City
These keywords were added by machine and not by the authors. This process is experimental and the keywords may be updated as the learning algorithm improves.
This is a preview of subscription content, log in to check access.