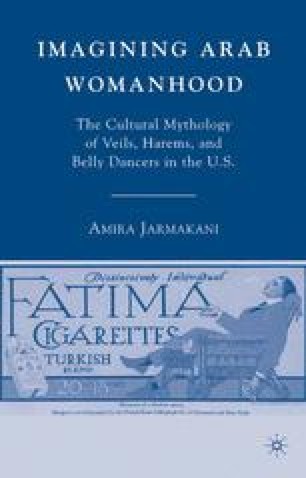 In the January 2001 issue of Maxim magazine, one can find a short, presumably lighthearted column entitled “How to Start a Harem: When It’s Time to Sheik Your Booty and Chase Some Veil.”1 Predictably, the images and text in this trite “how to” guide employ stock orientalist and sexist tropes, sometimes combining them in crude and seemingly unrelated ways, as in the caption underneath an image of a man riding a camel that reads: “The worst case of camel toe we’ve ever seen.” What is perhaps most striking about the column, however, is its ability to incorporate such a wide range of orientalist caricatures in just a few brief paragraphs. It invokes the categories of the harem, the sheik, and the veil while simultaneously deploying the image of the Middle East as a space of erotic, sexualized fantasy. Further, it reaffirms the grossest misperceptions of the harem as a space of pure sexual fantasy, where a man can have “a few dozen ladies on the side” and a space of absolute male power, where the master of the harem surrounds himself with eunuchs so he’ll “never have to worry about [other men] dipping their pens in company ink.”

Middle East Popular Culture Muslim Womanhood Ancient Civilization Arab Womanhood
These keywords were added by machine and not by the authors. This process is experimental and the keywords may be updated as the learning algorithm improves.

There is no document of civilization which is not at the same time a document of barbarism.