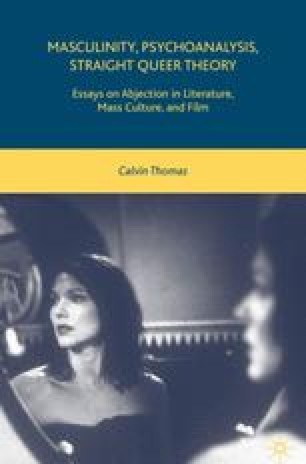 Re-Enfleshing the Bright Boys; or, How Male Bodies Might Matter to Feminist Theory

The proliferation of masculinity studies in the 1990s was viewed with understandable suspicion by some—probably most—feminist theorists. Such studies were seen as integral to, if not responsible for, a critical and institutional shift away from a specifically feminist project and toward what was considered a politically neutralized “gender studies.” On this view, the argument that men are no less gendered than women, that masculinity is no less a, social construction or performative masquerade than is femininity, is complicit with the blithe assumption that men and women are equally installed into symmetrically “gendered” positions. This assumption of equal or symmetrical gendering, supposedly inscribed in the phrase “no less” above, would obviously evacuate the feminist argument that the social and symbolic processes of gendering sexed bodies, of sexuating human organisms, produce and maintain unequal and asymmetrical relations of power. Masculinity studies and the “turn to gender” were thus charged with perpetuating rather than interrogating the reproduction of systemic male dominance.

Symbolic Order Linguistic Difference Queer Theory Feminist Project Lacanian Psychoanalysis
These keywords were added by machine and not by the authors. This process is experimental and the keywords may be updated as the learning algorithm improves.

It is in the signifier s foundational duplicity that the subject first finds the hidden stream in which he flows before seeping out—we shall see through which crack.

The unconscious ruins everything.