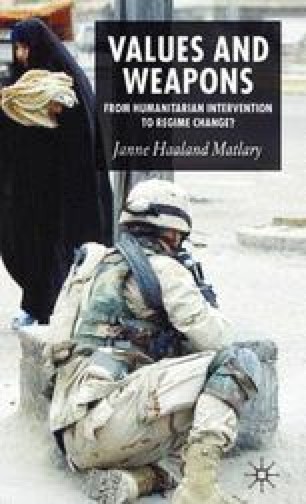 In this study, we have analysed the phenomena called ‘humanitarian’ and ‘democratic’ intervention, the latter is also called ‘regime change’ in American political discussions. The aim has been to find out whether there is a new type of interventionism that has come into being, based on a new type of legitimacy which changes the norm of non-intervention. In the introduction we presented the larger picture of the debate about the ‘rules of the game’. The critical issue was that of the constitutive rules of the international system itself: Will democratic legitimacy trump positivistic legal sovereignty? Will the ‘failed states’ cum terrorist agenda trump non-intervention?

Security Council Security Policy Military Force Constitutive Rule Security Agenda
These keywords were added by machine and not by the authors. This process is experimental and the keywords may be updated as the learning algorithm improves.

Wilhelm Grewe (…) argued that successive hegemons have shaped the foundations of the international legal system.

In the 16th century, Spain redefined the basic concepts of justice and universality so as to justify the conquest of indigenous Americans.

In the 18th century, France developed the modern concept of borders and the balance of power, to suit its principally continental strengths.

In the 19th century, Britain forged new rules on piracy, neutrality, and colonialism — again, to suit its particular interests as the predominant power of the time.

When there is sufficient operational capacity and political will, legal objections have little consequence.