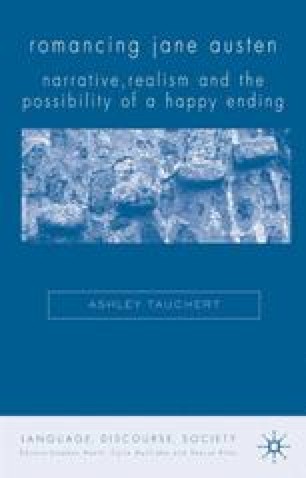 Sense and Sensibility: ‘her opinions are all romantic’

Sense and Sensibility draws to our attention a strong narrative tension between the empirical odds stacked against the possibility of a ‘happy ending’ (characteristic of realism), and the realisation of this ending nonetheless (characteristic of romance). The discrete happiness of the entwined double plots emphasises a dialectical ‘conversion’ of the two sisters. The hitherto ‘romantic’ Marianne’s final happiness is quiet, slow-burning, and discrete: ‘her joy, though sincere as her love for her sister, was of a kind to give neither spirits nor language.’ The hitherto ‘cool’ Elinor’s is passionate and extreme: ‘she found every doubt, every solicitude removed, compared her situation with what so lately it had been … she was overcome by her own felicity; — and happily disposed as is the human mind to be easily familiarized with any change for the better, it required several hours to give sedateness to her spirits, or any degree of tranquillity to her heart’.198

Happy Ending Cardinal Function Paternal Grandfather Final Determinant Wicket Gate
These keywords were added by machine and not by the authors. This process is experimental and the keywords may be updated as the learning algorithm improves.

Therein consists the alternative between positing and external reflection: do people create the world they live in from within themselves, autonomously, or does their activity result from external circumstances?

In entering the Novel, we break the umbilical cord, we are cast into a birth, which is repeated as rebirth or new birth at one or more intervals along the way. We begin by gazing at facades and interfaces, noting the combining of wet and dry. As we progress, we come upon mud and slime, marshy passages of possibility. Renewed contact with the earth and all its dirt is here sacred to us and to our purposes.

Margaret Doody, The True Story of the Novel196

He was released without any reproach to himself, from an entanglement which had long formed his misery, from a woman whom he had long ceased to love; — and elevated at once to that security with another, which he must have thought of almost with despair, as soon as he had learnt to consider it with desire. He was brought, not from doubt or suspense, but from misery to happiness.