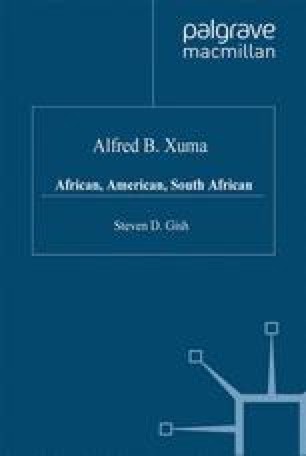 When Alfred B. Xuma was born in the last decade of the nineteenth century, Southern Africa was undergoing a process of fundamental historical change. The discovery of diamonds in 1867 and gold in 1886 had ushered in a degree of European political and economic intervention never before seen in the subcontinent south of the Limpopo. Although they rallied to defend themselves, African societies found their independence increasingly circumscribed by the formidable power of British and Boer forces. By the 1890s, the military conquest of the African chiefdoms in modern day South Africa had been completed. Besides consolidating their political control of the region, European interests began laying the foundations of a capitalist, mining economy at the same time.

Mission Station Late Nineteenth Century African Society Colonial State Missionary School
These keywords were added by machine and not by the authors. This process is experimental and the keywords may be updated as the learning algorithm improves.
This is a preview of subscription content, log in to check access.