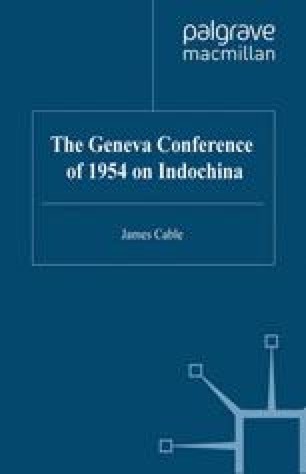 As the Conference accelerated towards its close, the conduct of diplomacy at Geneva took on a novel and somewhat unexpected character. That it became increasingly hectic was the predictable result of the deadline set by Mendès France. What was surprising was that the 9 delegations met only once – on 18 July – before their final session on 21 July. Serious business was transacted in bilateral encounters or in the ad hoc meetings of representatives from three, or four, or five delegations. Nor were the active participants the same. On 1 June Eden had complained to Bidault and Bedell Smith that he was becoming ever more embarrassed by his monopoly of the diplomatic initiative. ‘I was continuously producing proposals, because, if I did not, nothing happened’.2

Associate State Foreign Minister Final Session Demarcation Line Political Settlement
These keywords were added by machine and not by the authors. This process is experimental and the keywords may be updated as the learning algorithm improves.

’It is not what we would have liked to have had. But … if I have no better plan I am not going to criticise what they have done.’—EISENHOWER1