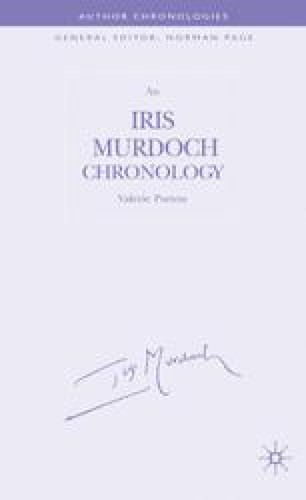 On both sides of her family Iris Murdoch (IM) is descended from Protestant Irish stock. Her father’s family, the Murdochs (the name in Gaelic means ‘navigator’) had migrated from Galloway in Scotland to Northern Ireland in the 17th century. They farmed for seven generations in County Down, not far from Belfast. In the 1880s, IM’s grandfather, Wills John Murdoch, spent some years in New Zealand. He returned home with a young bride, Louisa Shaw, and a baby, IM’s father Wills John Hughes Murdoch. Louisa was cheerful and adaptable and coped bravely with early widowhood: in 1903 she was left with three young children. IM remembered her grandmother well; she died in Belfast in 1947 at the age of seventy-five.

Communist Party Labour Party British Council Sunday Time Honorary Doctorate
These keywords were added by machine and not by the authors. This process is experimental and the keywords may be updated as the learning algorithm improves.
This is a preview of subscription content, log in to check access.