The Politics of Lying 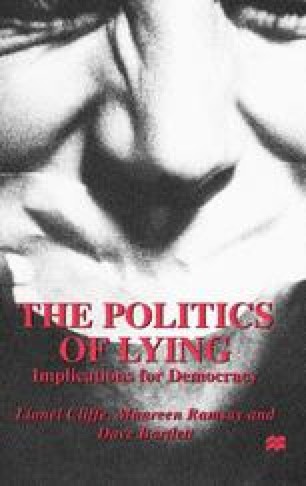 The Scott Inquiry: Matrix Churchill and the Arms to Iraq Affair

‘On the floor of the House [of Commons] – save in rare moods of resentment – the government controls the agenda’ (Birkinshaw 1997: 168). One such occasion was 9 November 1992 when Prime Minister Major was constrained, by the force of political opposition, and by the strength of media and public disquiet, to announce an inquiry under Justice Richard Scott into the export of defence equipment and dual use goods to Iraq between December 1984 and August 1990, the prosecution of three Matrix Churchill executives for contravening export licensing regulations made under the Import, Export and Customs Powers (Defence) Act 1939, and the use of Public Interest Immunity Certificates (PIICs) in this and other similar prosecutions (Scott 1996: A.2: A.3; also Birkinshaw 1997: 29; Doig 1997: 159; Norton-Taylor 1995: 31: 37; Leigh 1993: 255–6). Major thus gave way to widespread suspicion that ministers and officials had conspired to break the Government’s own export guidelines to supply the Iraqi war machine, that ministers had lied in Parliament to avoid public and parliamentary criticism, had permitted the prosecution of businessmen by Customs and Excise as a means of protecting themselves, and had sought to pervert justice by preventing the disclosure of documents through Public Interest Immunity Certificates.

Machine Tool Computerise Numerically Control Defence Counsel Export Licence Intelligence Report
These keywords were added by machine and not by the authors. This process is experimental and the keywords may be updated as the learning algorithm improves.

The answers to Parliamentary Questions…failed to inform Parliament of the current state of Government policy on nonlethal arms sales to Iraq. This failure was deliberate.