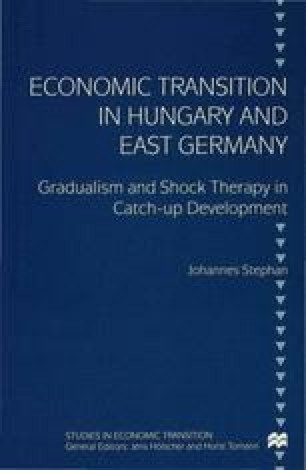 German economic integration, in one step, completely removed all barriers to the free movement of products and factors between the economies of East and West Germany. Whilst this granted the economic region of East Germany full membership in the European Single Market with its several regional and structural development funds as well as the Common Agricultural Policy, it also exposed all productive entities in the joining region to unprotected competition from West Germany and to some degree from the world market (West Germany and the European Union, or EU, still retained some protection for part of its domestic economy). This instant and complete exposure to foreign competition was executed before the economy of the new Bundesländer could adjust to the different structure of demand and the new price regime, i.e., the new ‘rules of the game’ and mechanisms in the successor system. Upon integration, the economy of East Germany still had to deal with the removal of its socialist legacies.

Foreign Trade Banking Sector Economic Integration Common Agricultural Policy Productive Capital
These keywords were added by machine and not by the authors. This process is experimental and the keywords may be updated as the learning algorithm improves.
This is a preview of subscription content, log in to check access.