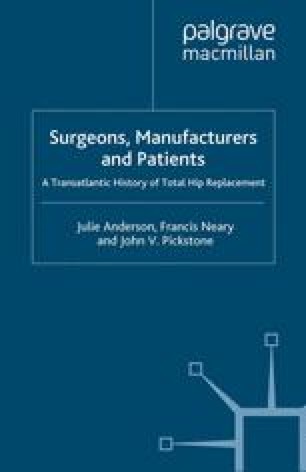 In the last chapter we focussed on surgeons and engineers, but we also mentioned the companies with which they worked. Deloro Stellite, the metal company, sold the McKee-Farrar and initially made some of the Stanmore models; Zimmer UK, a major orthopaedic supplier, was mainly responsible for the Stanmore; and the London Splint Company worked with the Exeter team, and was taken over by their long-time American associate, Howmedica. We introduce the present chapter by briefly exploring the histories of these British companies, before we go on to detail the relationship of Thackray with Charnley. This introduction will also show how the THR business built on the single-component hip prostheses which had been invented in the US but were also manufactured and sold in the UK.

Industrial Development Surgical Instrument Small Company British Company Femoral Prosthesis
These keywords were added by machine and not by the authors. This process is experimental and the keywords may be updated as the learning algorithm improves.
This is a preview of subscription content, log in to check access.